ABOUT THE ABORIGINAL ROCK ENGRAVINGS AND HISTORY OF JIBBON HEAD?

Jibbon is the name of the beach and area in the eastern corner of Bundeena. Its where the Bundeena township meets the ocean and Royal National Park. It derives from the Dharawal word djeebahn, which means ‘sandbar at low tide’. 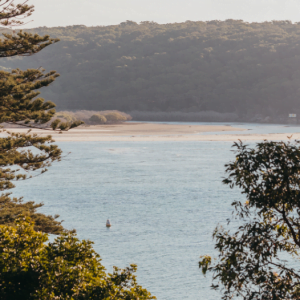 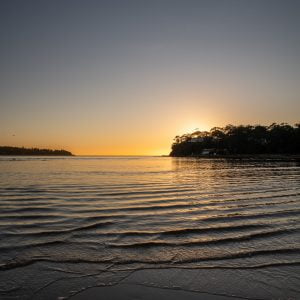 The sand spit you can see from the cottage is called Deeban Spit perhaps its also derived from the word djeebahn.

Only 250 years ago, before European colonisation, Jibbon headland in the Royal National Park was home to the Dharawal people.

Aboriginal rock engravings are located at the end of Jibbon Beach, Bundeena within Royal National Park.

Standing on Jibbon Beach you would have seen women coming ashore from bark canoes (nuwi) with their morning catch of fish (magura). Men returning from their morning hunt with banggarai, the swamp wallaby, and heard the sound of children’s laughter (djanaba) at camp.

JIBBON BEACH LOOP TRACK - The Jibbon Beach walk starts at the intersection of Neil and Loftus Streets, Bundeena. There is a small pathway down onto Jibbon Beach where the pristine sands will lead 250 m past a 7,000 year old sand midden (with grassy mound and exposed bleached shells) which stretches the full length of the beach towards the Jibbon Headland and aboriginal rock engravings.

If you were standing here during whale migration season 1000 years ago, you might have seen Orca herding humpback whales through these heads.

Orca beached the humpbacks on Djeebahn (Jibbon) enabling Dharawal people to kill and eat the whale. This symbiotic relationship was known as the Law of the Tongue.

At the end of the beach is a rock ledge scattered with empty oyster shells (more signs of the early hunters and gatherers). At low tide you will see several stairs cut into the sandstone leading from the rock ledge up onto the grass. These date from the European settlers who lived in the bush by Jibbon Lagoon until the 1970’s.

Follow the track up through the grasses and banksia trees to a clearing marked by modern stone and steel sculptures depicting the rock engravings further on. This clearing was an ancient Dharawal campsite (Dharawal people used their knowledge of plant life-cycles and fire to create and maintain this grassy clearing as a camp for generations).  They camped here in the winter months and created a habitat around the camp that attracted animals they wanted to hunt. They also ensured desired fruits and berries would grow in the area thereby creating a larder of food around their campsite.

Follow the signed bush track in the north-eastern corner of the clearing until you see a signed track junction on your right. At this junction the Jibbon Point Loop Track gives a choice of heading right to the engravings or left towards a small rock ledge with views of Port Hacking River over to Bass and Flinders Point at south Cronulla, Little Jibbon Beach, and Port Hacking Point at Jibbon Head. Continue on this loop track which will lead back to connect with Jibbon Beach.

From the metal viewing platform (designed to ‘float’ on the ground surface to reduce the possibility of impacting any buried cultural items) you can see aboriginal carvings dating back thousands of years. Traditional Aboriginal art depicts animals, people and spirits or Dreaming ancestors. Baiame, the Creator, is prominent. Marloo, the kangaroo and ‘bringer of the rain’, daringyan the stingray, a baby orca, and two big orca (overlapping each other) during a seal hunt - all set in stone. Orca and Dharawal hunters had a symbiotic relationship. During the annual humpback migration of winter and spring they worked together to feed the several hundred people who lived around the bay. Orca were sacred.

Sydney sandstone is a very soft stone and is relatively easy to work. To make a figure in the rock it is first ‘pecked’ and then ‘rubbed’ (like joining the dots) using traditional tools to create a groove about 10 millimetres deep and 20 millimetres wide. Over time the grooves erode due to the softness of the rock. They also get filled in by grit, sand or lichen. Senior men oversee their maintenance. Highlighting of the Aboriginal rock engravings is done by the Dharawal people, the Dharawal Local Aboriginal Land Council and the National Parks and Wildlife Service.

Unfortunately some 1960s engraving vandalised the site. YOu can see more pics here thanks to Friends of The royal National Park

This is an important piece of Dharawal cultural heritage as well as making access to the engravings easier, with more meaning, for visitors to the site. Help protect this site by leaving nothing behind but your footsteps.

Retrace your steps back to Bundeena.

HOW TO GET THERE:

If arriving by car, the Jibbon Beach walk starts at the intersection of Neil and Loftus Streets, Bundeena (1-1 ½ hours straight to the Aboriginal carvings and back  - 3km). Parking is limited.

Beaches are unpatrolled at Bundeena and Jibbon.

No toilet facilities at the beach - public toilets near ferry carpark opposite Bundeena shops.

Credit: Friends of The Royal National Park. Thanks for allowing us to share this